Window shutters date back to Tudor times (1558-1603). It was very common for homes to have shutters back then. These were mostly made of solid wooden boards. Considered a luxury at the time, glass was not very common, as it was very expensive and hard to come by. Wooden shutters would be decorated to give an essence of individuality. They would be opened to let in sunlight and fresh air, and closed at night, with a metal pole placed in the front for security. Today, shutters are used for decorative purposes rather than any practical use.

Shutters have become very popular again in recent years. They create a vintage, rustic look, and give some uniqueness to a property; they can also be used indoors as room dividers or with interior windows. If you like the idea of adding shutters to your windows, you can buy reclaimed ones or even make your own!

There are four kinds of outdoor shutters; board and batten, Bermuda, Plantation louvered; sometimes known as colonial, and panelled. They are available in a variety of materials including MDF, vinyl, synthetic foam, faux wood and solid wood. Basswood is the most popular wood for shutters.

Board and batten shutters (sometimes referred to as B and B) have an Old World, rustic character, because of their simple construction. They are one-to-three boards held together with a thin cross panel, which can go horizontally or at an angle across the shutters.  Bermuda shutters are louvered style, typically fixed at the top of the window (instead of the sides). Used to let in light and air, they also protect homes from bad weather, and would typically be used in tropical regions. But they do look great on cottages and beach front homes. Plantation shutters, sometimes called colonial blinds are interior and exterior window shutters. Different Louvre sizes bring different benefits to different rooms. Smaller slats reduce light levels; larger ones permit more privacy for large or overlooked windows. Panelled Victorian and Georgian style shutters offer more practical benefits. Close them to block out light and create an extra barrier against noise and weather. It is not surprising that solid panel shutters like these are especially popular in period homes near busy roads. Raised panel shutters look similar to doors or kitchen cabinets, with a single or double raised panel. Because they have a low profile, they blend well with almost any style home. 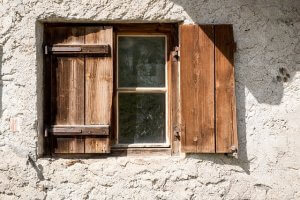 Traditional board outdoor shutters possess antique style charm. You could try making your own DIY shutters from used pallets. Simple instructions and basic materials and tools are all you need to make beautiful old world shutters for your home. Make these from wooden pallets; you can pick up second hand ones for just a few pounds, or even old wood from fences or doors. Add some rusty old hinges, and coat either in a clear varnish to show the detail of the wood or paint on a splash of colour for a continental look. The best bit about these shutters is that you can take pride in the fact that you designed and made them all by yourself!

Whichever shutters you chose, they can offer solutions to what you need whether that is more privacy, reducing noise from outdoors, more protection from bad weather, security or simply for traditional charm.

We would whole-heartedly recommend your firm to anyone.